The last post. Must admit trying to keep 2 blogs going has become a bit of a chore. Also after loosing the impetus with my ACW project after the re fight of Gettysburg, I've struggled for meaningful posts for this blog. So I have decided to import all the posts from here and added to my main blog http://scottyswargaming.blogspot.co.uk/ I'm undecided on the long term future of this blog, but it will currently remain as I have no plans to delet it, however anymore ACW themed posts will go directly to my main blog.

Just wanted to say thanks for following, your comments always meant a lot.
Posted by Neil Scott at 12:44 3 comments:

Email ThisBlogThis!Share to TwitterShare to FacebookShare to Pinterest
Labels: update

Sorry for the lack of posts as I've been heavily involved in other projects and my ACW forces have had to sit on the sidelines. This could all change as Mick is planning a large ACW game the back end of April. He will not say which battle as he doesn't want us swotting up on it. However it may provide me with the impetus to get the last of my figures painted, namely 2 union infantry brigades (these guys have sat half painted for about 3 months), a confederate cavalry brigade including dismounted figures and a union C-in-C diorama. After that I will need to purchase the extra figures I need to finish the union and Confederate 1st Corps.
Posted by Neil Scott at 23:54 1 comment:

Email ThisBlogThis!Share to TwitterShare to FacebookShare to Pinterest
Labels: Ramblings

Sorry for not posting for a while, been stuck on other projects and I guess I just needed a break from ACW. Not sure of the make of these figures as I picked them up off EBay. Just require a little touch up and re basing, to blend in with the rest of the force. These are done to represent Baxters' Brigade from Robinson's Division. 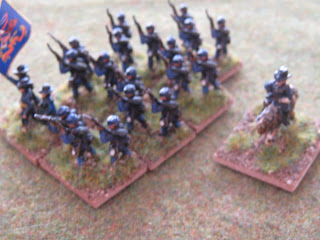 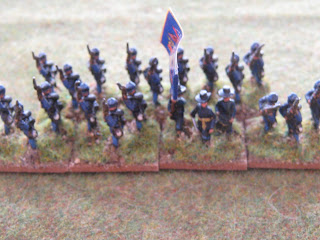 Email ThisBlogThis!Share to TwitterShare to FacebookShare to Pinterest
Labels: USA

Well this week saw the conclusion of our club game. The union line was bolstered by the eventual arrival of elements of VI corps. Much to the relief of the Union C-in-C as 2 divisions from V Corps were streaming back to the table edge as they were severely mauled by the Confederates of Rodes' and Johnson's divisions. On the Union right flank II Corps eventually got some energy and began to advance against Hood's division, forcing the confederates back to the last bridge. However just when they thought things were going their way, Hood counterattacked, destroying a couple of brigades from Crawford' division before his advance was checked.

On the left flank, the remains of V Corps and Buford's cavalry, slowly ground down Early's isolated division. In the center things began to get very bloody, with brigades on both sides being knocked out of the line due to heavy casualties. Eventually though the Confederate attack began to run out of steam and the union launch a final counter attack and managed to sneak a draw out of a winning position. So honours even until the next battle of our campaign. 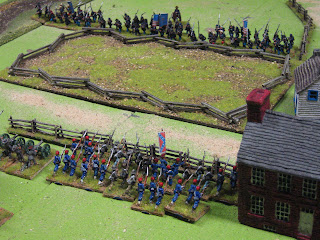 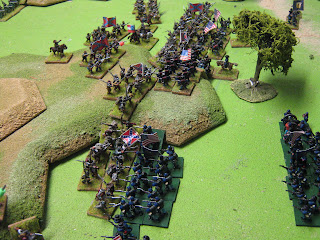 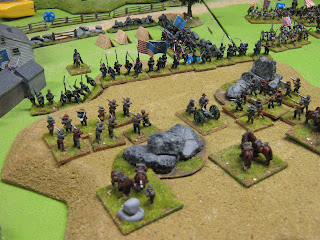 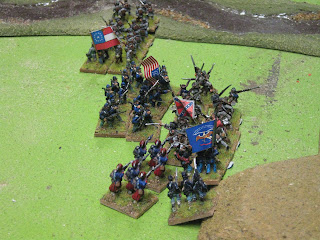 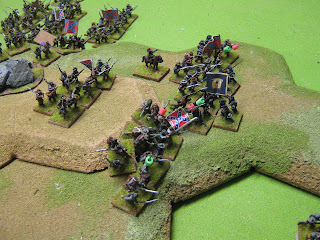 Bitter contest for the hill 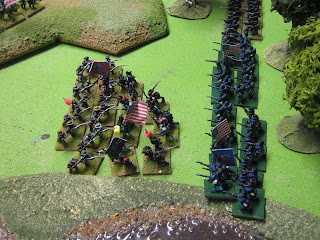 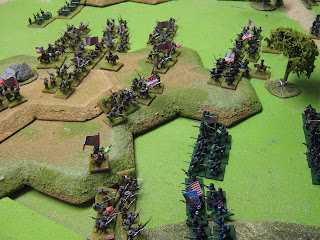 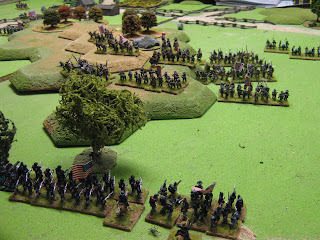 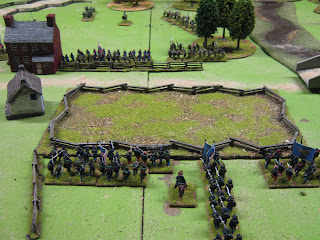 McLaws gets his troops into position
Posted by Neil Scott at 11:49 6 comments:

This week at the club saw the opening moves of our latest ACW game. It was an encounter battle that saw both sides becoming embroiled after their respective cavalry divisions clashed the night before. For the Confederates they has all 3 divisions from Ewell's Corps, but only Hood's and McLaws'  from Longstreet's Corps. For the Union they had II, III, V as well as 1 division from VI corps. This gave the union only a slight advantage in numbers, artillery was about even.

The map below illustrates the respective options open to each side from where they could advance onto the table. 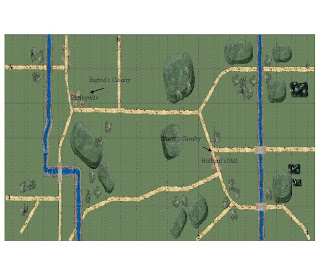 The confederates under Ewell immediately went onto the offensive, pushing back Buford's cavalry and eventually slamming into the advance elements of V Corps, sweeping aside 2 of their brigades. On the Union right flank, Hancock advanced cautiously towards the confederates of Hood's division, allowing the rebs to conduct an easy fighting withdrawal as the units were need to support Mclaws' attack against III Corps. Next week will see the 2 battle lines really come to grips with each other.

Did manage to take a few photos of the opening moves. 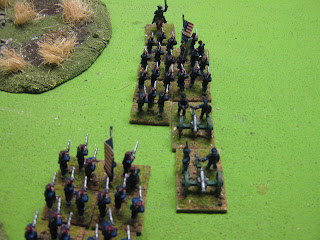 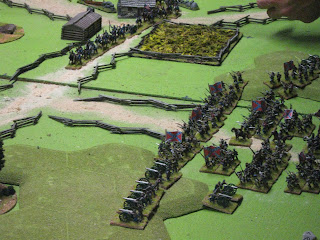 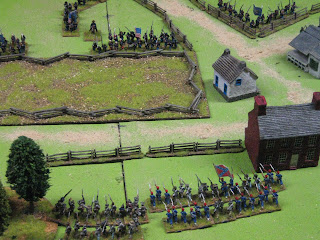 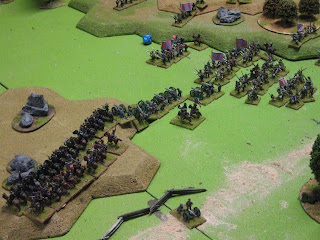 With me concentrating on my 15mm armies, I've reluctantly decided to part with my 28mm units and listed them on E-Bay. I'll be able to use any funds they generate to purchase the necessary figures to finish Union I Corps. So some final pictures of said figures. 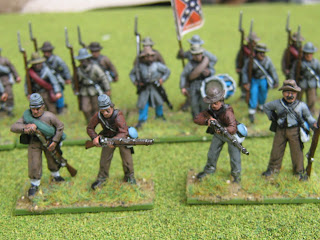 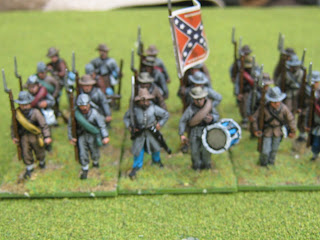 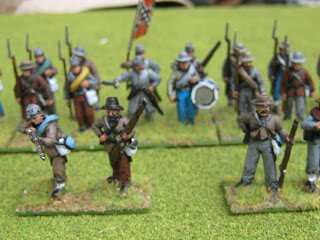 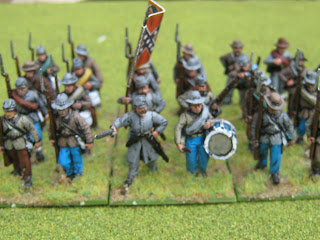 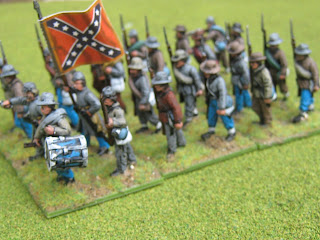 I've just updated my union OOB with the latest painted figures, namely the brigades of Willard, Carroll and Hall. I'll try to get out tomorrow and get some photos done of the latest units. I just need to finish 1 more artillery piece and II Corps will be finished, giving me 3 full infantry corps.

To help speed this project along a couple of the lads at r=the club have agreed to contribute some troops. Paul is going to do AP Hill's Corps for the confederated, meaning once I finish I Corps that is them completed. Bayley is going to do the union VI and XI Corps, this leaves only I and XII Corps to finish. These should definitely be done in time for the anniversary of Gettysburg.
Posted by Neil Scott at 13:50 No comments: